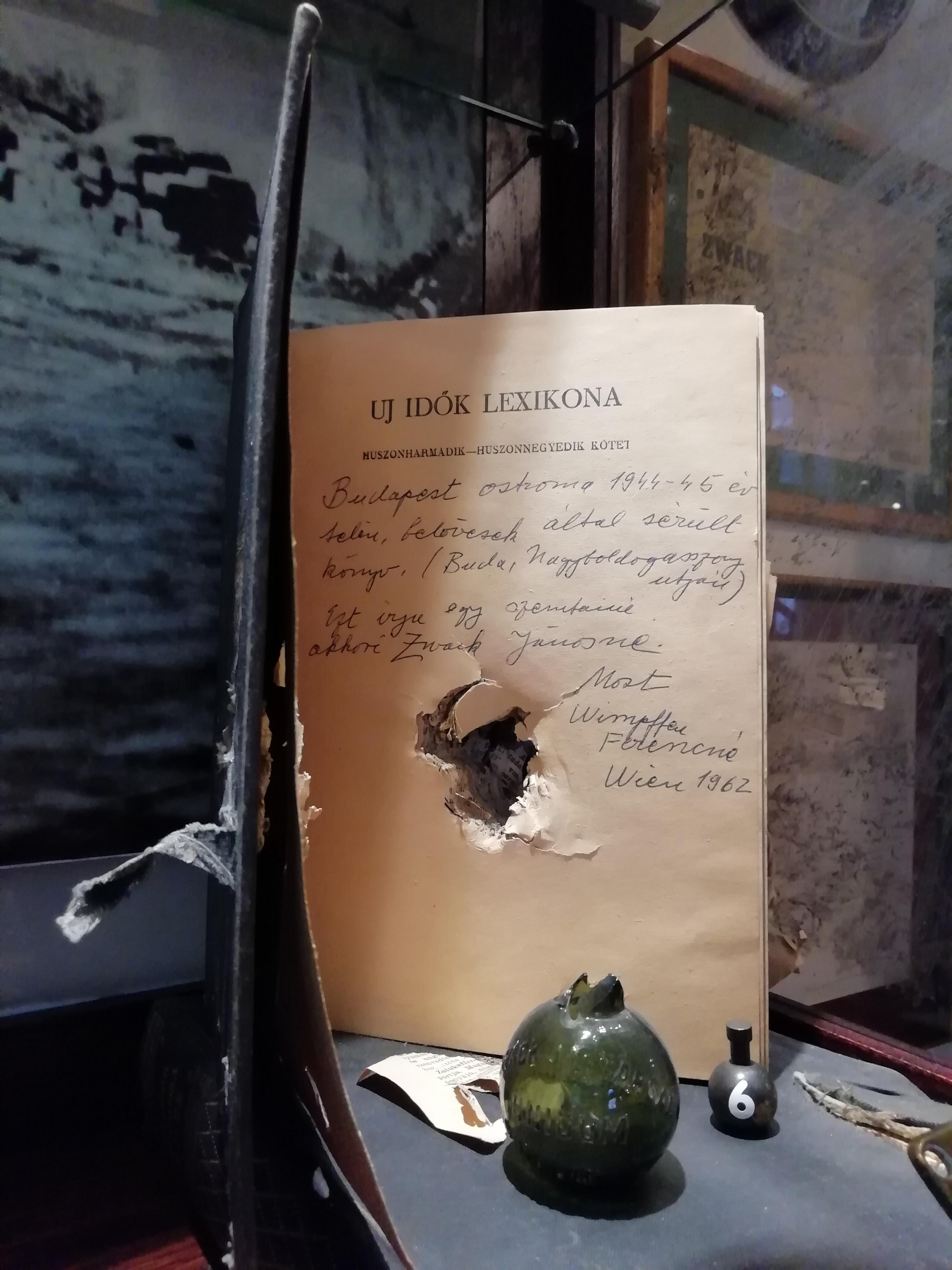 In the 1940’S the Second World War brought devastation to the city of Budapest, as you can see from the sunken bridges in the photographs on the brick wall on your left. Budapest was, with Warsaw, one of the cities most damaged by the war, with Allied air raids destroying the distillery on 3rd April 1944. (see photographs  on the left side of the case) The plant was looted by the retreating Germans, while the Russian soldiers used the barrels to make pontoon bridges across the Danube. The Zwack family was hiding in a cellar in Aunt Mici’s house on the Gellert Hill. Although the family had converted to Christianity in 1917, according to the anti- Jewish Laws  and for Adolf Eichmann and his cohorts who arrived in Budapest in 1944 they were still Jews and had to wear the yellow star. Fortunately, Janos and Vera Zwack were good friends of Raoul Wallenberg, the heroic Swedish diplomat who saved hundreds of Jews from deportation and the house where they were hiding was next door to the Swedish Legation, while Wallenberg himself had his office on the floor above the cellar where the family was hiding.  Wallenberg saved many Jews by issuing Swedish Free Passes (see Mark 1) including passes to members of the Zwack family. It is Wallenberg’s own signature on the document. He also issued a total of 30 Swedish passports, one of which was in the boy Peter Zwack’s name (Mark 2).

Persecution of the Jews was rabid in newspaper articles as well. See mark 3, the daily Magyarország newspaper whose title speaks for itself: “How come that 16 of Zwack’s 43 officials are still Jews?”

In 1944, after the deportation decree for the Jews of Budapest, the Hungarian Jewish Council requested all workers in the distillery of Jewish descent to report to the authorities listing the possessions they were allowed to bring with them. Marked 4, this summons has been translated into English and German.

There was an air raid shelter in the basement of the Zwack distillery and you can see the yellow enamel Ovohely sign on the wall to your left.  Even after the bombing ceased these were very difficult times for the people of Budapest who had to survive extreme cold and starvation. The Soviet soldiers who liberated Budapest from the Germans were primitive foot soldiers who ran their bayonets through the books in the Zwack house to be sure that there was nothing hidden inside (see the Lexicon on the lower shelf mark 6)     The one bright note here  is Peter Zwack’s matriculation certificate on the top shelf which he somehow managed to obtain despite the prevailing chaos (mark 5). Peter attended a prestigious Catholic School run by Cistercian monks. You can also see his first University report card.

Marlene Dietrich’s famous ballad: ’Where have all the flowers gone’   mirrors the bitter mood of the age; you can listen to it by pressing the green button on the right-hand side of the case.