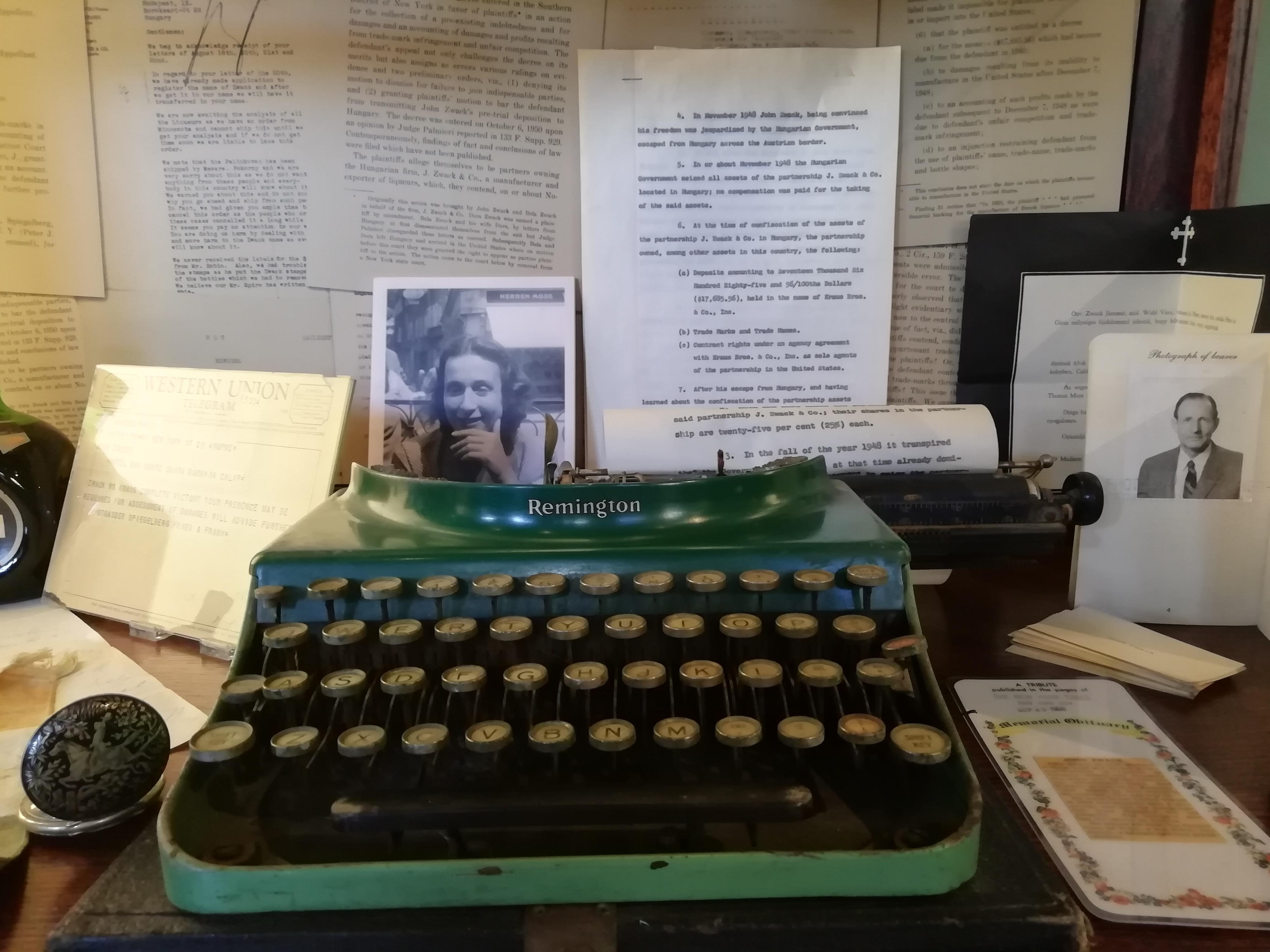 The right side of the case shows how Péter Zwack, having lived in America for a decade, had adjusted to everyday life in his new country. He continued to work in the spirits and wine business, enrolling in a National Distillers’ course for sales reps and working for wine importing companies such as the Gancia Asti Spumante dynasty. A fanatical football fan all his life, at that time Peter Zwack was the goalie on the Hungarian Emigre Football Team photographed here.  In 1956, Peter Zwack set up a Foundation under the name First Aid for Hungary to help the refugees of the ’56 Hungarian Revolution. He travelled all over the United States giving talks to raise funds and was able to collect 120,000 dollars for the cause donated by generous Americans.

Meanwhile his father discovered that the Communist State-run company in Budapest was still doing business with Kraus Brothers, exporting products to the United States, above all Unicum, under the name Zwack.    He instigated a court case against the Kraus Brothers and the Communist government to retain the right to his family’s trademarks. He typed innumerable letters and documents to lawyers and official bodies on the portable typewriter on the lower shelf. In the end he was to prove successful and in a precedent- setting ruling the State-run company in Budapest was no longer allowed to use the name Unicum in the West. As a result they resorted to exporting their ersatz Unicum under the name Beverage Bitters in the bottle you can see on the left of the lower shelf. You can also see some of Janos’personal belongings – his watch and passport and a photograph with his first grandson, Peter

Janos Zwack did not live to enjoy the success of his litigation as he and Bela Zwack both died within two weeks of each other and Janos was buried in the United States. It was not until 2011 that Peter Zwack had his father’s body returned to Budapest where he is buried in the family crypt in the monumental cemetery in Fiumei Street.

On the left hand side, on the top shelf are photographs of the 1956 Hungarian Revolution and an Unicum bottle which at that time would have been used as a Molotov cocktail.  The little Freedom Fighter in the main photograph is holding a bottle of Barack Palinka like the one featured on the right.

In the rest of the showcase you can see the progress made by the Budapest State-run factory in the early ’50’s. Although the entire spirits industry had already been centralized, different projects were assigned to the individual plants and the Unicum distillery was charged with the production of specialty brands. Work competitions, innovation committees, time and money saving initiatives, special work teams and brigades were set up. Slogans, posters applauding socialism and the Soviet Union and the power of the working class were printed and displayed. Good work was usually rewarded not by bonuses but by official diplomas such as those on the lower shelf.

Between the two sides of the case, you can see one of the Unicum bottles with the fake recipe and without the Zwack name which, as a result of the trademark ruling in New York, could be only sold behind the Iron Curtain.